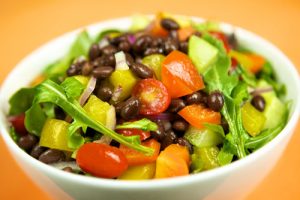 I confess I did not know the reason for celebrating “Cinco de Mayo” until I Googled it. It’s the day the Mexicans kicked some French butt and prevented us eating Napoleons on this day.  (Had the battle been between the Mexican & French cuisines, we all know who would have won!)

Growing up in the Midwest, I don’t remember ever celebrating “Cinco de Mayo” or even knowing what it was.  Does it count that in my early teens my friends and I loved to go to Chi-Chis to chow down on baskets of nachos with salsa and drink virgin margaritas?!  (Thankfully Tex-Mex food has come a long way since then…)

Somehow my move to Boston after college would be my first introduction to the 5th of May festivities, which at the time meant decorating the hospital cafeteria, playing Mexican music and serving what was considered Mexican fare — burritos, tacos, nachos with cheese, etc. After work was time for real margaritas — you get the idea.

As I get older and lose the desire to drink tequila on a “school night” since I still have to function as a mom the next day, I would rather honor the day that is celebrated more in the US than in Mexico as it were, in a more subtle way and with some healthier food than what one typically eats that day.

If you’re trying to follow my “2-week challenge,” you don’t have to let Cinco de Mayo sabotage it.  Start the day with a hearty, delicious vegetarian version of my “Healthy Huevos.“  Removing the flour tortilla, refried beans and cheese and replacing it with TJ’s frozen organic brown rice, fresh avocado slices and salsa is a great way to enjoy a lighter huevos rancheros. I apparently like strong flavors and wash this down with 2 cups of black coffee.  (Did I mention I have 4 boys?)

Black coffee isn’t necessarily a part of a Cinco de Mayo menu, but I definitely think black beans should be! If you weren’t planning on including them, I’m hoping my twist on a black bean salad entices you to.  This “Loaded Black Bean Salad” — which you may recognize as the cover shot for Lighten Up! — is my favorite way of eating black beans when they’re not in a soup! I make this salad over arugula for nutritional value but primarily for the great, strong flavor of arugula sort of as a replacement for cilantro. I love this “soapy” herb, but it has a polarizing effect on people’s taste buds, so I just try to avoid it since I don’t want to turn off cilantro haters from even trying my recipe if they see that ingredient!  In any case, here it is — a healthy way to get loaded on Cinco de Mayo!